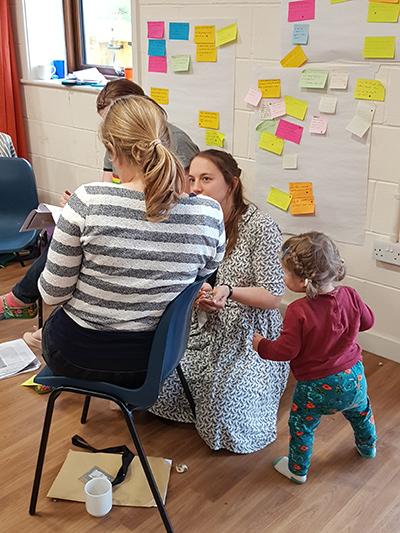 Parenting Science Gang was a citizen science project, run by and for parents and funded by Wellcome. Parent groups, in collaboration with scientists, designed and ran their own experiments to answer questions of importance to them. These groups discussed, planned and made decisions primarily on Facebook, via Facebook groups. We also ran a number of real world events around the UK, to support the project.

Their co-produced research has included: mass spectrometry to study the composition of breastmilk for older children; surveys and interviews to study the experiences of mothers and pregnant women with healthcare providers; and laboratory tests with temperature sensors on babies being carried in slings.

In addition to their scientific achievements, the project has had significant personal impacts for many of the people involved. Participants reported an increase in their knowledge of science and their ability to find, understand and critique evidence. Their feelings about science also changed, becoming more confident in relation to science, more interested in it, that scientists were ‘people like them’. They felt more empowered to use science as a tool for things that mattered to them.

Every group found a question which they thought was important, but which hadn’t been studied before. These have led to eight papers in press or in preparation and seven conference presentations so far, with at least two more to come. Scientist collaborators reported that the experience gave them new insights into their work, and experimental methods, and inspired them to do more – and more ambitious – public engagement.

There were 2,608 members, across all the groups (total group membership was higher than this, because some people joined more than one group).

Our typical member was:

We used a variety of different methods, to use perspective and methodological triangulation to better gauge the overall impacts of the project, and understand more fully the effect on participants. These included interviews with participants and with the partners / relatives / friends who accompanied them to events; pre and post project surveys; discussion threads in the groups; post-it notes at events; reflections and observations by project staff and evaluators; and online activity stats.

Synthesising data from all these methods, we identified the following key themes among the outcomes for participants:

One of the clearest outcomes for members was an increase in their science-related skills, in several areas – information sourcing, information evaluating, knowledge of specific science findings and experimental techniques, and a greater understanding of the scientific method.

Another very clear theme was a change in many participants’ feelings around science, in several different (but interlinked) ways. They now felt that scientists are ‘people just like them’. Their confidence discussing science, understanding science and accessing science in general increased (including small but significant numbers returning to education to study science). Members frequently reported that they now felt that science was something that they could contribute to, there was a sense of them developing a science identity, and they felt empowered to use science as a tool for things that mattered to them – this empowerment was all the stronger, for happening against a context of many of them feeling disempowered and marginalised by pregnancy and motherhood.

We included in this theme the social and emotional outcomes of the project, for members, which seemed less directly related to the science content. There was a palpable sense that many members relished the chance to have intelligent conversations with other adults, particularly other mums who were going through the same experiences, and to work together as a community to achieve something. Again, this cannot be divorced from the context of mothers with small children feeling isolated, starved of adult interaction and as if they’ve lost their identity. There’s obviously some overlap here with the increased confidence and empowerment subthemes of ‘feelings about science’. These things all worked together and seemed interlinked for our participants too.

Impact on science and scientists

There were two main ways the project impacted on science. Firstly, finding (and starting to fill) research gaps important to parents in numerous fields of science. Secondly, they affected the scientists they interacted with – giving scientists new ideas and different perspectives on their work, feedback on their research and plans from a parent perspective, inspiration to do more public engagement, and positive affirmation from members who found their research useful.

We’ve deliberately structured our report to provide both breadth and depth, starting with:

Introduction – explaining the background and context to this project, and giving an overview of our methodology and findings.

Methodology – exactly how we ran the project and how we evaluated it.

Our Groups and the Science They Shaped – the character and topic of each group, what research they did and what their findings were.

We then include several sections of ‘Top Tips’:

Finally, we provide more in-depth details on our main evaluation strands and findings:

To download a copy of the full report: Parenting Science Gang Evaluation Report

In Parenting Science Gang, parents of small children (overwhelmingly mums) came up with their own research…