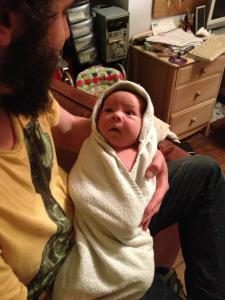 I’m delighted to announce that the Wellcome Trust, in their infinite wisdom, have decided to give a Society Award to Parenting Science Gang. (Proposed slogan: Parenting is always an experiment, so why not collect the data?).

A few months ago, I was talking to Dr Caspar Addyman, who has spent the last ten years researching laughter in babies. He told me that his new project was partly about infant sleep, and he was finding it surprisingly interesting. “I’d never really thought about it before. As a researcher, I just thought, ‘Oh, the baby is asleep. It can’t do anything now. I’ll wait until it wakes up.’ But it turns out that parents of babies talk about sleep all the time!”

I think this goes to show that someone can be a great researcher, who really knows their subject, but still have missed things that are really important to the public they work with.

More recently, I got invited to a research-sharing day run by the NCT. One piece of research was on the experiences of first-time parents in the first few weeks and months of their baby’s life. Everyone felt overwhelmed and isolated. Everyone felt they were ‘uniquely failing’.

I felt like that too. It’s like an earthquake in your life, and you’ve no idea what you’re doing but there’s a tiny baby utterly dependent on you. You want someone to tell you what to do. Advice given with certainty seems appealing. But unfortunately, often it’s the worst, the most non-evidence-based advice, that is given with the most certainty. The world is full of terrible parenting advice, in books, on websites, from family-members and from strangers in supermarkets.

And yet, we know that the first three years of a child’s life are the most crucial.

If we can help parents in those first years to feel more confident and able to weigh the advice they come across and the evidence it’s based on, then maybe that helps them parent.  If we did that by letting groups of parents design their own experiments, to answer the questions they have, then we might also pick up on some things that scientists hadn’t thought about, but that matter to parents. If, as we go along, we gather together up-to-date advice on a range of parenting topics and publish it on our blog, that would also be handy for lots of parents, not just the ones who take part in our experiments.

So that’s why we will be running Parenting Science Gang over the next two years. Taking our user-led, co-produced, citizen science approach developed in our first project Nappy Science Gang and working with 12 existing parenting groups (4 in the first year and 8 in the second year) to choose their own research questions and then design and run their own experiments.

We have lots of people lined up already. But we will be looking for more:-

If you think you could be one of those people, or you’d just like to find out more about what it would involve, then please email Sophia Collins on sophia.e.collins@gmail.com

Why you should join Parenting Science Gang!

Are you member of a parenting group? (Maybe a Facebook community group?) Do you wish you could…

PSG at the House of Commons!