Find out in this Q&A session with Science Gang instigator and Project Director Sophia Collins.

Q: Can you tell us a little about how you went from using cloth nappies and reading different washing instructions to doing Nappy Science Gang?

How did you get involved with the Wellcome Trust? Did you just – I don’t know – send them an email? 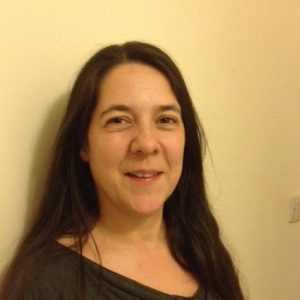 After I had a baby I got into reusable nappies, but I got frustrated by how there was lots of different advice online about how to wash them. All of it really certain, but lots of it contradicting each other.

“You must be able to do an experiment to work out which way is right” I thought. And then, as I lay on the sofa bfing for hours, I kept thinking about it, and how it could be a citizen science project, where the ‘citizens’ were really in charge.

I’d been working in public engagement for a long time, and run Wellcome funded projects before, so I wasn’t starting from scratch!

I then set up a group, put a post up in a couple of nappy groups asking if anyone else thought it was a good idea, and what questions people might want to investigate, and inviting them to join the group. And about 70 people joined. I thought, woah, I’m not the only one who wants to see some science here! (Actually, I did this before putting in the application, to test if it was feasible).

I talked to various people in the field and set up some partnerships. And did some background research. Happily, Wellcome thought it was a good idea and decided to give us some money.

We did a bit more of a recruitment drive and ended up with a couple of hundred members and we got to work!

We had online Q&As with lots of experts, just like in this project. We gathered a massive list of questions, we voted on which ones to pursue and ended up with three:-

Q: How many questions did you have to work down from?

I imagine it was hard to pick just these three!

We had about 80 before voting.

Then we got into smaller groups to try to design experiments to answer those questions. And quickly realised that some of them were kind of impossible to design an experiment to answer.

“Which is the best detergent to use?” To answer that, you’d have to test every single detergent on the market, with every type of nappy, in every type of washing machine, in every sort of water (hard/soft/etc). It’s impossible. (Unless you have billions of pounds)

So we realised we had to work out a question that we COULD answer. So, we came up with a short list of common detergents and tested some of them.

We sent ‘mystery detergent’ sachets to volunteers and they washed their own nappies with them (three washes with each detergent) then they scored them for smell and how clean they looked, and they also swabbed them and sent the swabs off to a microbiology lab.

It was really a lot of work! Lots of work from volunteers, and also, working with scientists doing tests for us in labs.

Q: What did you feel was the magic element that made Nappy Science Gang so successful?

We just tried to get on with doing what we were trying to do. A lot of the time it didn’t feel like a massive success at all! We had some successes, but some things didn’t work the way we’d hoped.
The thing people are always most impressed by was the fact that we changed NHS guidance on washing baby items. But I’ll let you into a secret, that was actually the easiest thing of all the things we tried to do, and it almost happened by accident.

One member of the group kept asking questions about non-bio washing powders, as she was originally from the USA, and they don’t have non-bio there. She was, like, ‘How come babies in the UK need everything washed in non-bio, and babies in America don’t?’ And she just kept asking. Eventually, she found a scientific paper that said bio detergents caused no more skin problems than non-bio.

One of the scientists who was advising us said, ‘Well I’d never really thought about this before, but maybe there isn’t a point in non-bio’ and he emailed the NHS website to ask what evidence their advice was based on. They investigated, couldn’t find anything. They asked a professor of dermatology, he said she was right, there’s no reason to avoid non-bio for babies. And they changed their advice.

But really it was all down to someone asking questions, and keeping asking them.

Q: What I’m taking from your story is that we need to have a wide variety of people involved.

The Important Question, whatever it ends up being, will occur to one of us even if it’s something the rest of us don’t even see?

Yes. And also, that changing the NHS’s guidance didn’t actually come out of anything we set out to do and it wasn’t to do with our experiments. It was kind of a by-product of us giving people the chance to talk a lot about the evidence and the science about things they cared about.

I have to confess, that at one point, I said to the person who was going on about bio, ‘Look, we are never going to get the NHS to change their guidance, so just drop it with the non-bio thing.’ Little did I know!

Q: I’d like to change WHO guidelines based on what I know about the young microbiome.

I know that’s not really within the realm of possibility, but it has made me wonder if we could do experiments on children’s poo! Is that weird? (I mean, yes it is, but you know.) Maybe our question could be about gut health.

Q: Do you think the scientist’s status meant the NHS listened to him rather than ignoring his email?!

And I might be so wrong…but it’s just a hunch.

Or maybe it was his status that made him feel he was allowed to ask the question?

Q: What was the biggest challenge that Nappy Science Gang faced, and what how did you solve it?

Q: If you could experiment on, research or test absolutely anything

without having to think about money, time-scale or whether it was actually possible to do, what (in parenting) would you like to find out?

I felt like CIO was not something I wanted to do at all. I try not to judge, but it doesn’t sit well with me. I think it would be great to get some real evidence of whether it is harmful or not. But it would be hard to do, practically. You can’t really randomly assign people to do CIO or not and force them to do it. And if you’ve not randomly assigned people, I don’t think you can ever know whether there’s some difference between people who choose to do it and people who don’t.

Q: Nappy Science Gang made that totally unexpected discovery about the build up of mineral deposits on the nappies

(deposits that handily were fantastic places for bacteria to hang out). But the results of the tests to find out more about it were inconclusive, right?

So what happens now?

I dunno! That project has finished now, we had a small grant from the RSC to investigate the hydroxyl apatite mystery. But it turned out that all our experiments were inconclusive, and we don’t really know much more than when we started that project.

Apparently science is like that a lot. Which they don’t teach you at school. In science ‘experiments’ in school you always get the answer. In real science, often experiments are inconclusive, and you spend a lot of time trying different things, going, ‘Well, that’s not it then, let’s try something else.’

Q: But you do know more – you know there’s a huge mystery lurking in the fabric of reusable nappies.

Sophia: You can watch our video:

Q: How CAN citizen science change the world?

I don’t suppose we are going to bring about world peace, but we can maybe change lots of little things.

Q: What are your idealistic hopes and dreams for these two years of PSG?

I want to prove that you can make projects truly family-friendly if you make the effort, take ‘mums’ seriously and not just sideline them.

I want to encourage science to pay a bit more attention to the questions mums have and the things they care about (I’m happy to say ‘parents’, but actually, it is all mums who have joined all of the groups, and who joined NSG).

I want to give groups of parents the chance to ask a question that matters to them, but which hasn’t mattered to science, and find an answer to it.

I want people to feel and experience that science is a thing that can work for them – especially people who maybe feel it hasn’t been for them.

I hope, actually, that some of the science we do can help in some little way to make the world a better place for breastfeeding, for mums, for kids, for families.

I hope it can be one tiny little brick in making our society and the human race see that the most important thing we do as a species is care for and bring up children. It’s not a trivial, unimportant thing that needs to fit around industry and politics and everything else. It’s the sole purpose of all biological organisms, to pass on their genes and care for their children!

For more on Nappy Science Gang and citizen science see:

Are picky-eaters doomed to long-term bad health? This is the fear of many of the…

The effects of computer games: A Q&A with Dr Pete Etchells

How do computer games affect behaviour? What evidence is there? Peter Etchells of Bath Spa University…

Are vegetables really so much nastier than sugary or salty tastes? Is texture the biggest…