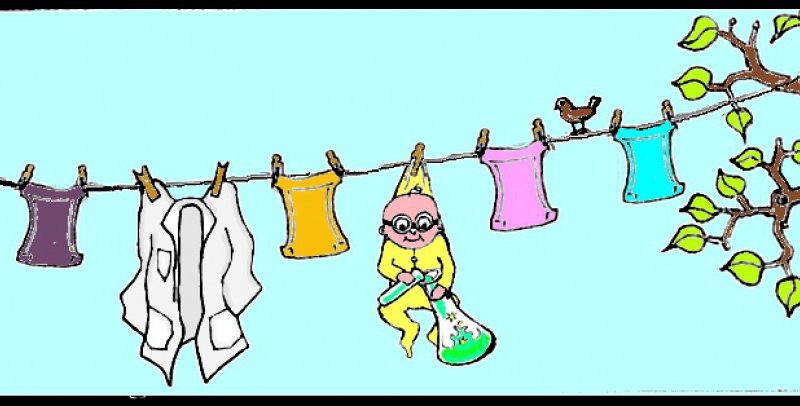 How do we know that Parenting Science Gang will work? Well, we don’t really. But we do know that a similar approach was a great success for Nappy Science Gang. Here’s what one of the gang has to say about her experience.

Highest science qualification:  I have no degree in science – mine is actually in English literature. But to get a degree at most American universities, you have to take courses from a broad range of subjects in addition to the ones related to your degree, so I have taken (and passed!) “Intro to Oceanography” and “The Biology of Cancer and AIDS” at UMass Amherst. Both of which I selected because there were no lab sessions with graded experiments for me to mess up. Luckily, we had very engaging lecturers running these courses, and I ended up learning a lot anyway.

I remember feeling upset that my daughter’s nappy rash was outlasting any creams or prescriptions I could give her. I felt frustrated that it seemed to clear up if I put her in disposables, then came back if I put her into the cloth nappies I’d paid good money for and was very attached to using. My daughter’s rashes did not seem to be related to teething alone, and I was sure there was something wrong with the cloth nappies themselves. They were smelling awful, even after being washed in the machine, and leaking everywhere. That didn’t seem right.

When I first started using cloth nappies, I relied very heavily on washing advice from nappy retailers and manufacturers – many of which firmly stated to use (at most) “a half dose” of detergent. I interpreted this to mean “fill half of one Surf Small and Mighty liquid detergent dosing ball with non-bio powder” – so, for about six months, I washed a 5.85kg load of dirty nappies with approximately 15ml of powdered detergent.

To resolve the stink and leaking problem, I had to strip wash all 40 of my daughter’s nappies, which involved a lot of extra work for me. Soaking them in the bathtub overnight in Rock N Green (which seems to be mostly washing soda), splitting them into three separate loads so they could fit into my 6kg washing machine, washing each load 2-3 times on 60 degrees with 100ml of detergent, anxiously watching each load through the machine door, waiting to see when the bubbles would go away. Strip washing took several days to complete. During those several days, I started asking my nappy-related Facebook groups for advice on detergent. I was sure there was a buildup of Persil and wanted reviews on a couple of expensive “nappy friendly” detergents, which were marketed to “rinse cleanly away”. A very experienced cloth bum mum gently suggested that those detergents were worthless (in her experience, anyway), and that my problem might be related to not using enough proper washing powder. I thanked her curtly on Facebook for not giving me the answer I wanted. And then I began to Google.

Turned out, there were websites on the internet – mostly based in America – that had been questioning whether the “use less detergent” advice was sound. They were very firm in their opinions. One site ran a large user survey and (essentially) a desktop study of detergents. Some of the writers had fought the same rash battles. The washing advice was mostly tailored to North American top-loaders, but I gave using a full dose of mainstream detergent a shot. I got the cleanest-smelling nappies I’d had in months, but also soap bubbles on the final rinse. I’d been told over and over that soap bubbles were bad, and I was so confused about the right approach. So, I rinsed, and rinsed some more, and sometimes even washed the nappies twice. My daughter’s rash cleared up, but I used a lot of water.

Around that time, Sophia proposed the Nappy Science Gang project in one of the Facebook groups I was a member of. It seemed perfect, and I was keen to join. I guess frustration leads to investigation. I wanted answers – good answers – about how to properly wash cloth nappies and keep rashes away. Because, ultimately, I wanted to keep using cloth nappies on my daughter. If I could get the washing routine right, maybe I could even get some of the environmental street cred back. The idea of performing experiments that we could then evaluate was really exciting.

Nappy Science Gang created a place for parents to ask questions and support each other seeking out not just answers, but evidence to inform the answers. I didn’t expect to be as involved as I have been (and I haven’t been nearly as involved as some of the other members). I am not the most scientifically-qualified member of the group. I wasn’t entirely sure, at first, what I might be able to contribute, besides the fact that I like to read and can dig up information about niche subjects on the internet. But my questions on the forum have been taken seriously and given good thought. Sometimes, the information I dig up can contribute positively to a discussion. Most of the experts we’ve chatted with have been polite and really supportive of our questions. I’ve learned a lot, and through learning, have gained confidence in my ability to learn. For the most part, there has been very little intellectual snobbery in NSG, and I think that has empowered all of us – whether we are educated in a scientific subject or not.

I see this confidence growing in other group members, as they summarize, again and again, what the results tell us so far. I see more people weighing them up when considering their washing approach. I see some group members starting (sometimes very reluctantly, but still starting) to let go of their preconceived notions on “how to do cloth nappies”, because of these results. I think some of our experts and advisors may also be revising their opinions, or at least, waiting to see if further investigations can confirm their original hypotheses.

The effects of the project are starting to spread around the other Facebook groups I’m in, too. The “half a dose of detergent” advice still abounds, but I see more parents approaching NSG with questions about washing routines. On the general cloth nappy groups, the experiment results come up more frequently in our discussions. The nappy retailers and manufacturers who have given (what appears to be) less than ideal advice, are very engaged with their clients on social media, and they are coming up against a lot more of us looking for evidence behind their advice. Some of them seem to be very unhappy that they have work to do.

As for me, I joined the group looking for firm answers to my questions, but have grown more comfortable with the idea of results begetting more investigations. Seeing how that works firsthand has helped me take a more nuanced approach to the science reporting I read on a regular basis (which is mainly about nutrition, but also about diseases). I am trying to grow more comfortable with the heated debates that presenting evidence can generate – what Ben Goldacre calls: “A kind of intellectual S&M activity … We know it’s good for our souls. If the idea survives, then great; if it needs more evidence, we decide what studies are needed next and do them. Then we all come back next year, tear the evidence apart again, and have another think. Real scientists know this. Only the fakers cry foul.” (I Think You’ll Find It’s a Bit More Complicated Than That, 2014, p. xvi) I’m glad NSG gave me a shot at being one of the real scientists.