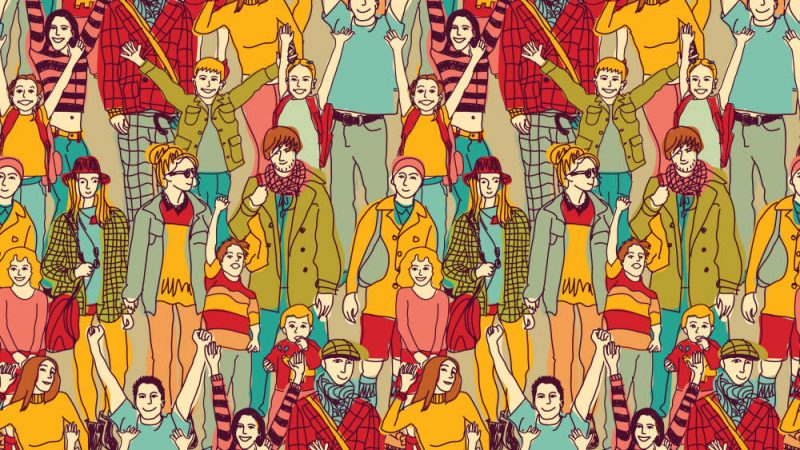 Parenting Science Gang, and its sister project, Nappy Science Gang, are citizen science projects, projects where scientists and non-scientists work together to answer questions about the world.

In the past decade, the number of citizen science projects has sky-rocketed, partly because scientists realise it can be a great way of doing science that is relevant to people’s lives, partly because the internet has made people so much more connected and technology has allowed us to ‘out-source’ some tasks, and partly because things that people have been doing for decades, like noting down the plants and birds they see in their daily lives, are being re-badged as citizen science.

I’ve worked in the citizen science field for nearly a decade, so I’m going to tell you a bit more about citizen science and why I’m so excited to be a part of Parenting Science Gang. I’m going to start by talking through the stages of the scientific process. These are:

Most citizen science projects just involve members of the public in collecting or processing data, but Parenting Science Gang is being led by parents, and so parents are going to be deciding what questions we want answering, developing methods to address them, collecting the data, analysing the data, and communicating about what we find out. 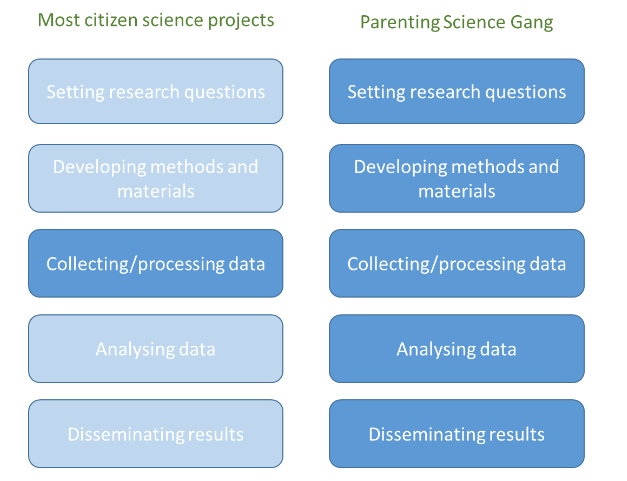 So I thought it would be helpful to talk through each of these tasks using examples of previous citizen science projects.

Involving the public in Parenting Science Gang choosing the questions to be researched in citizen science projects is really not that common! Where it does happen, this often comes from an issue of local concern, for example, the Gardenroots project arose at a meeting between scientists and local residents in Arizona who asked “Is it safe to garden and consume vegetables from my home garden? And if so, how much can I eat from my garden?”.

In Nappy Science Gang, a Facebook-based citizen science project, we discussed cloth nappy washing practices and gradually whittled down these discussions into testable questions, with support from experts in our ‘Live Chats’.

Once you have decided on the questions you want to test, the next step is to develop methods to address those questions. Sometimes at this stage you realise that it isn’t possible to address your questions with your expertise, time or budget, so you may have to go back to designing questions!

In Nappy Science Gang, we began to develop methods in our Facebook group, and once we had some idea of what we wanted to do, we would ask questions during the ‘Live Chats’ with scientists to make sure the methods were sensible and achievable.

Another approach, for more scientist-led projects, is for scientists to develop ‘pilot’ methods and materials, and then ask people to test these methods and give feedback. An example of this is the OPAL Brownfield survey, where my colleague Rachel designed materials and then supported groups to go and collect data in their local areas over the summer, and then refined the methods over the winter to improve the survey.

This is the stage of the scientific process that the majority of citizen science projects involve citizens in. For many projects, this is the only task that non-scientists get involved in. Tasks include recording the number of plants in flower on New Year’s Day, walking around Nairobi with an air pollution sensor, and looking at UK lichens to monitor air pollution. In Nappy Science Gang, one of our experiments involved washing nappies and testing in a lab the amount of bacteria left on them. So in this case, both scientists and non-scientists were involved in generating the data.

Some citizen science projects ‘crowdsource’ data analysis. For example, a project called Galaxy Zoo involved classifying images of galaxies that had been taken by the Hubble space telescope. By getting a large number of people involved in analysing data, the time taken for this stage can be much reduced. For example, in Galaxy Zoo, it was calculated it would take 3-5 years for one person working 24 hours a day, 7 days a week to classify all of the galaxies once. Instead, 40 million classifications were made in approximately 175 days by more than 100,000 volunteers!

Some projects use scientists to analyse the data collected by the public but then make the data available on their website for anyone to download and use as they wish.

Sometimes this can be through websites where people see ‘dots on a map’ of their records, for example Nature’s Calendar which asks people to look out for things like Hawthorn trees first flowering. Often dissemination is limited to a scientific journal article and associated press release. Whatever method is chosen, it is vital that results are communicated to the people who took part in the project.

Back to Parenting Science Gang

So what really excites me about this project, is that parents are in charge of all stages of the scientific process. As one of our participants said at our residential planning meeting a few weeks back “Oh, I get it now, WE’RE the scientists”.