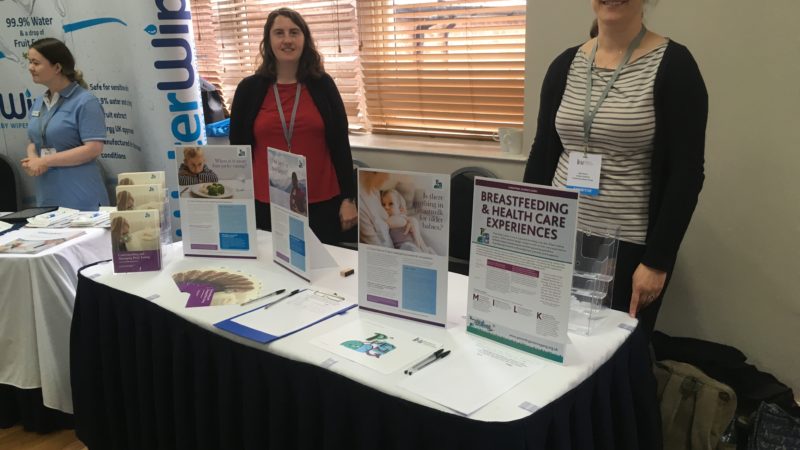 Earlier this month, PSG headed off to the Institute of Health Visiting (IHV) Conference in Manchester to share the results of some of our research.

Our Director, Sophia Collins, gave a presentation about co-producing research with parents, while four of our members manned a stall showcasing the research from Breastfeeding Older Babies and Beyond PSG, UK Breastfeeding and Parenting Support PSG, Mealtime Hostage PSG, Science-Aware Natural Parenting PSG and Breastfeeding and Healthcare Experiences PSG.

Two of our members – Kate Raine and Alex Duxbury – share their experiences of the day.

I had a very enjoyable day at the IHV conference. I was representing the Breastfeeding and Healthcare Experiences group. Being neither a healthcare professional nor a peer supporter, but a stay at home mum with an interest in science and finding answers, it was a completely new experience for me.

I didn’t really know what to expect. I had some very interesting conversations with health visitors, other researchers and others, such as breastfeeding counsellors. I explained what Parenting Science Gang was and how it worked, and everyone seemed very impressed at what the groups had managed to achieve (What? You’re just parents and you have done all this in your spare time?!) and that felt very satisfying.

We only had to man the stall during the break times, so got the chance to attend some of the talks. It was good to know that a lot of the themes we found in the BF HCE group were the same or similar to those found in other people’s research, such as Patricia Wise and Wendy Jones (who I didn’t know, but I was sitting next to at one point!) It was useful to learn from some of the presentations, and questions asked, about the issues facing health visitors, some of the initiatives that different teams were running and how they engage with parents.

The one thing that I would have done differently was to have tried not to work against such tight printing deadlines, but with some last-minute creations our stall still looked good. One of the nice things about the day was meeting other people from PSG, who I had only spoken to online over the last year or so, and to talk to them about what they have been doing. I am glad I had the opportunity to be involved. 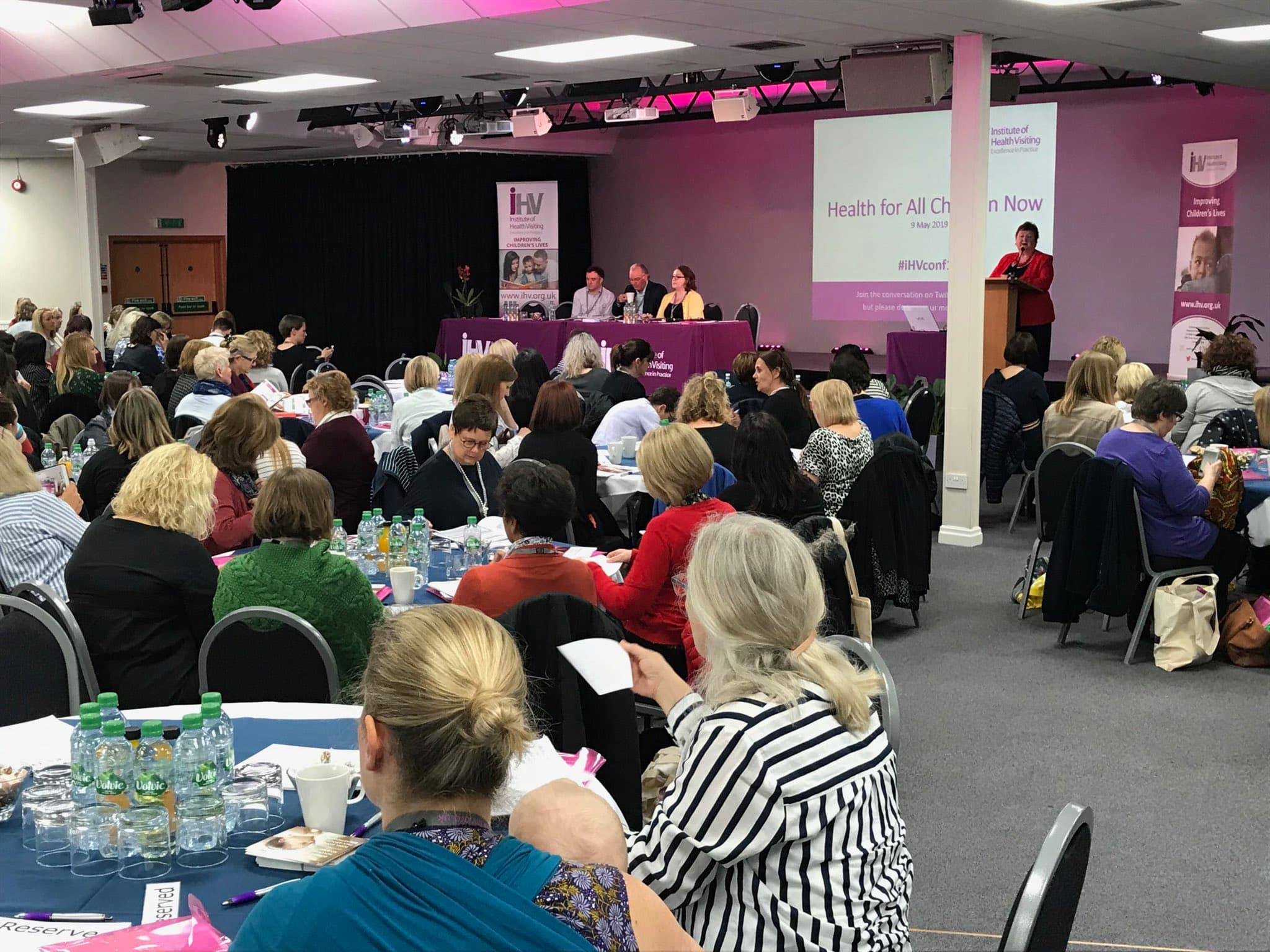 I attended the IHV conference to represent the babywearing and temperature study as slings and babywearing is something I am interested in, as a parent, sling consultant and owner of a sling brand (Lifft Slings).  I had attended a range of conferences previously having worked in research as a Nutritionist, then later in more public health/midwifery areas, but have never attended a Health Visiting conference before. I also brought my 8 month old son along for the day, and it was his first conference experience!
It was great to meet the other PSG members in real life and to learn more about their studies. We were stuck a bit behind the table, but managed to chat to lots of delegates and some left their details wanting further information. We spoke to a wide range of delegates including health visitors, policy makers, researchers, other exhibitors, and conference venue staff. They had traveled from all over the UK including South Wales, the Isle of Wight, the north of Scotland etc, as it was quite a prestigious event in the health visitor calendar.
The other stalls covered a wide range of companies and organisations including Slimming World, First Steps Nutrition, Channel Mum, a childhood cancer charity, an academic journal publisher, and Water Wipes. I didn’t really have a favourite as they were all so different, although I quite liked Channel Mum and Bump Baby as both used apps/websites to share information with new mums.
I was fortunate enough to listen to quite a few presentations over the day, and only had to excuse myself from one of the morning talks to change my baby’s nappy.  The first few speakers really set the scene for the day and how it linked to the document they were publishing (which I haven’t read).  They had a mother talk about her daughter Molly who tragically passed away from a brain tumour. Molly had been unwell for years but no one noticed the symptoms such as increased head circumference, stiff neck, bad behaviour, vomiting, or they put them down to other things experienced by toddlers like tantrums or fussy eating. This was a very moving speech and showed how important documenting everything is and linking up between different specialists, GP, HV, hospital staff etc.
Other great talks I attended covered topics such as improving vaccination rates, smoking cessation during and after pregnancy, promoting oral health, breastfeeding experiences in traveller communities. In Wales they have a new Family Resilience tool to measure family resilience called FRAIT which is a more positive way of measuring adverse childhood experiences and intervening where necessary to support families.
The best thing about the day was to see so many Health Visitors energised and wanting to learn best practice from research and to make a difference in their work.  Also so many lovely comments about baby Toby in his sling, which was a great conversation starter to then tell everyone about the temperature and slings study!
The worst thing – there were lots of great speakers, but you could only attend one talk from four choices in the morning and one from four choices in the afternoon, so I couldn’t learn about everything. I also had an early start and a very long day as lots of traffic both ways and I had only come from Sheffield!
All in all, a very interesting day, and I would recommend it to anyone who gets the chance to attend a conference, even if it is your first time or outside your usual area of knowledge. Great venue too. 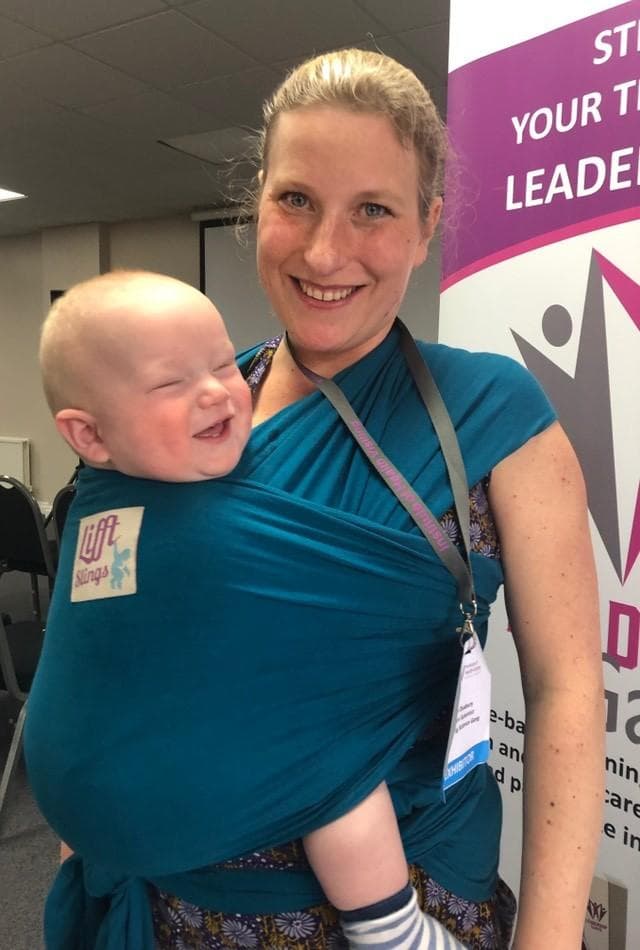 As a mum of two little children, I have to grab my ‘me time’ wherever…

The Art of Motherhood: a Q&A with artist Lisa Creagh

Have you had infant feeding advice from healthcare professionals that made a difference to you?…