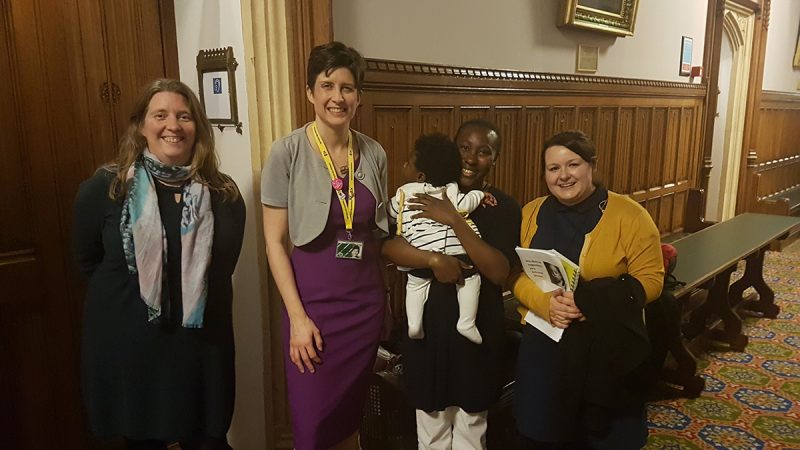 Our Breastfeeding and Healthcare Experiences Parenting Science Gang were represented at the Infant Feeding All Party Parliamentary Group (APPG) at the House of Commons last month. Here’s what happened…

“It was exciting coming across the opportunity to attend the Infant Feeding APPG in the PSG group. I was pleased about Lucy representing the group with Rebecca but when I came across the APPG’s newsletter on and learnt that anyone could come, I had to explore the possibility of going. It was with such delight that I found out from Dr Brown that babies could come along too; so we went.

Marching through parliament, and walking into the room with so many breastfeeding champions was ‘oxytocinly’ wonderful. Listening to Dr Brown’s presentation of her research, UNICEF’s update, Shel Bank’s comment about progress in relation to the breastfeeding funding cuts in Blackpool, Helen Gray’s talk about Infant Feeding planning in emergencies in the UK, and other updates, questions, and comments, whilst keeping my baby fed and entertained was incredible. Alison Thewliss chaired the session brilliantly, and it was lovely to see MPs turning up in response to their constituent invitation.

Meeting Rebecca and Lucy after the meeting was such an icing on the cake, especially given that introducing ourselves was secondary to the insightful conversation we were having about breastfeeding.

Altogether, it was a very encouraging and inspiring session; and a such a privilege to meet so many women from around the country, who care so much about breastfeeding support, promotion, and protection.”

“I am quite politically motivated, so when the opportunity arose to attend the APPG on Infant Feeding and Inequalities representing Parenting Science Gang (PSG) I was instantly interested. What PSG is doing is new and unique and representing the group in parliament is an honour! The experience was fantastic; meeting with Rebecca and Mo and talking about everything breastfeeding felt empowering.

I was struck by how male dominated Parliament is, which is evident pretty much everywhere but then suddenly we found ourselves waiting outside a room with a load of other women, and babies! Babies in slings! We all piled into this rather small room, people sat and stood where they could and everyone shared their ideas and updates from varying organisations, all breastfeeding related.

Sitting there just felt really inspiring and whilst we didn’t get too involved, it was exciting to have people come up and give positive feedback on what the PSG is doing. Hopefully at a later meeting having the opportunity to present what is being done by the PSG to the APPG is fantastic and will hopefully aid further developments surrounding breastfeeding.”

The Breastfeeding and Healthcare Experiences PSG have been invited to share the results of our research with the APPG – watch this space!

Why you should join Parenting Science Gang!

Are you member of a parenting group? (Maybe a Facebook community group?) Do you wish you could…