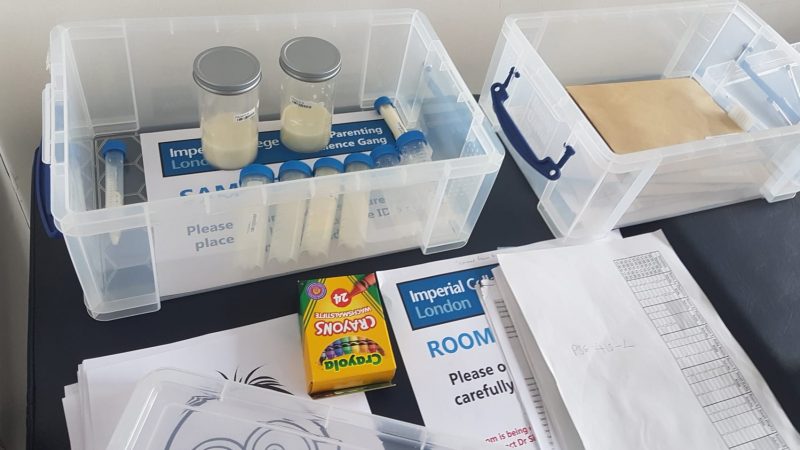 Over one hundred mothers gathered yesterday at Imperial College, London to donate breast milk to the first research study analysing how the composition of breast milk changes as children get older.

The experiment, probably a world record for the number of mothers expressing milk in one place, has been championed and designed by citizen science project, the Parenting Science Gang (PSG), funded by Wellcome and working in collaboration with Imperial College London and the Hearts Milk Bank.

“We are hugely excited about this experiment and the enthusiasm of our breastfeeding mums for finding out what is in their milk and how it benefits their children. We have mothers coming from all over the UK –  Poole, Manchester, Galloway and Monmouth, as well as London and the surrounding areas – who are nursing children of various ages, demonstrating an enormous commitment to this important study.

“There is almost no research on the composition of human milk for nurslings older than two years old. But we do know that it changes considerably over the first year. This experiment hopes to find out more about what is in human milk produced for children who are two, three and four years old, and how it differs from milk for younger children.”

“I am delighted to have joined forces with the Parenting Science Gang for this study. This research will help to build future studies into how breastmilk composition changes over time and help us to understand the ways that breastfeeding can cut a mother’s risk of breast cancer. The study is part of a larger cohort study called the BECS study, led by Dr James Flanagan at Imperial.”

Collaborating with Dr Shenker is Dr Simon Cameron of Imperial College, who said:

“This experiment is breaking new ground. The technique – called rapid evaporative ionization mass spectrometry (REIMS) –  and analysis we are using is based on a technique previously used to analyse cow’s milk. This is the first time it will be used with human milk.”

The results of this ground-breaking experiment will be made available to the public.

The experiment in numbers:

Residential Weekend June kept us busy! The month began with a weekend in Derbyshire for…