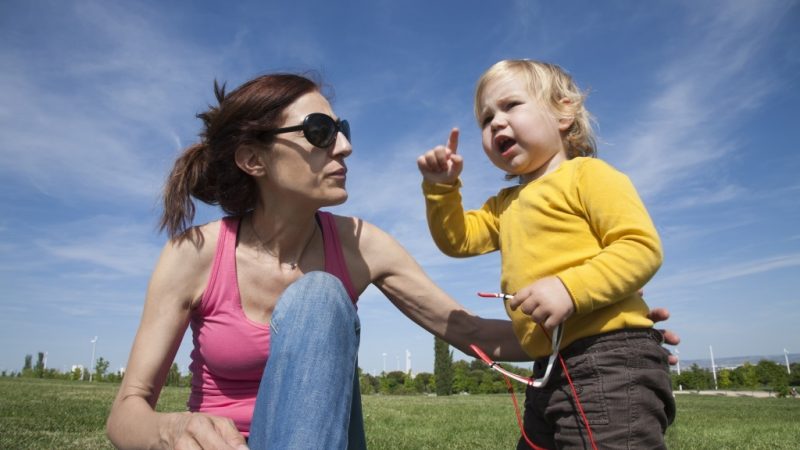 Silke Brandt from the Lancaster University Babylab joined us to answer our questions about language development in children. Silke’s research focuses on how language and cognitive development interact and she is also interested in the influence of growing up bilingual. This is how it went … 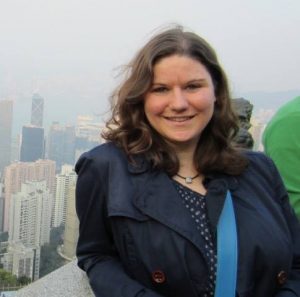 Q. We have recently been discussing children’s first few words and someone suggested that tend to lean towards either social words (e.g. hi, bye, names for people) or object words (eg tractor, cheese). Is this the case and if so, what does it tell us?

Silke: there are different learning styles – also later in their syntactic development, but every child uses a bit of both strategies. First words are often object labels or routine words like Hi and Bye. Often these things are just very salient in the child’s environment.

A lot of it also depends on how often the parents use specific words or expressions. My little nephew said “so” when he was 12 months… Also what interests them, of course. So, if he focused on cars a lot, you might have also said car.

There are also interesting cross-linguistic differences. A lot of East Asian languages children tend to also learn a lot of action words early on because the languages allow you to drop object names. For example, when we say “the lion is running” in English, they would just say “running” if it’s clear from the context that we’re talking about “the lion”. But they wouldn’t drop action words like “running”

Q. which letter sounds are easiest, and does this influence first words? I was wondering about sounds that are easier to say like Mama and Dada

Silke: It definitely affects whether you understand their first words. It should be letters like m, d, t, p then g, k and of course vowels (a, o…), the more difficult ones are s, f, sch, your English th.

L a difficult one and R also.

Q: My son is 39 months and still pronounces L as a y sound
Silke: Yes, L does take a while. Not to worry!

Q: Silke does the age a child starts to talk have any correlation with later academic intelligence?

Silke:  No. There are huge individual differences. An analogy: if a child only starts walking at the age of 2, they can still become a football pro.

Q: I’ve noticed that a lot of people seem to have concerns about their children’s speech development from an early age? Why do you think this is? Do parents just expect more or is there maybe a lack of understanding of this type of development?

I think parents also do a lot of comparing to other children. There might be a lack of understanding. It is really important to understand that each child will be different.

Q: When do children start talking in sentences?

My son is 20 months. He’s saying new words every few days (object words mostly but also action words) when can I expect him to start stringing sentences together?
Silke: I don’t like to give you a precise date because individual differences are HUGE in early development. But it sounds like he’ll start putting together words soon. Roughly when they have acquired about 100 words.

Q. When should we be expecting children to start using verbs? Does this always come after nouns?

Silke:  Some verbs should also come early. And it can be quite difficult to categorise early words. When they say biscuit they might refer to the whole event of EATING a biscuit for example. Other words like “kiss” are ambiguous: they could be nouns or verbs.

Q. Is it true that children focus on one area of development such as movement or language? My son didn’t walk until 14 months. Some children walk at 10 months.

Silke: I think there’s a lot of truth to this. All of my friend’s little ones were crawling before my son – he was a wait till I can walk guy! But he’s certainly picked up language skills a lot faster.

The range of what is “normal” before they turn 3 is huge. A 2-year-old might know 50 words or 400 words. And that would all be “statistically” normal if you look at the whole population.

Q: Does learning baby sign language help with learning to talk? Some children sign from about 6 months I’ve heard.
Silke: As far as I’m aware, it doesn’t have any positive effects on later language development. But it doesn’t hurt either…

I think it’s nice for the parents to communicate, but then again babies will also start communicating by pointing at things, for example. That usually starts around 10-12 months.

The key thing is that you communicate with your child. You can use gestures. You can sing to/with them. You can just talk to them. In principle: input is key to language development.

Q: How can we know if young children understand our words?

Is it possible to identify the gap between when a child begins to understand what you’re saying, and when they show that they understand it?

Silke: that’s an interesting question. it’s one of our tasks as scientists: how can we test how much children understand. I think the best evidence is a response that makes sense. But then again they also learn quite a lot of routines.

So, we usually try to see whether they show a GENERAL understanding of specific words, for example. We would do this by using a given word in a new context.
to isolate it from its context/routines.

The earliest test you can do with children is to see whether they map specific words to specific objects. For example, if you think he understands the word “dog”, show him different kinds of dogs, or see whether they get the cereal if you ask them to the cereal at 6pm 🙂

Q: My son overgeneralises all animals as ‘cat!’.  Can you tell us about the process of how meanings become more specific?

Silke: Often they use the best word they’ve learned for the object/animal they see. After they’ve learned more animal names, they should also use them in the right contexts.

Q Where’s the balance between speaking at simplified level the child will understand vs using more complexity to help them progress? You tend to hear both extremes i.e. a parent using very baby-ish talk or standard adult language with a 1 year old!

Q: Silke You shouldn’t talk like you talk to a dog. You want them to be exposed to the right target. But, of course, shorter sentences will be easier for them to process…

I also think that most parents are naturally quite good at using the right level. There’s research showing that they adapt and also get the child to the next level by slowly using more complex sentences etc.

You’re probably doing the right thing if you don’t think about it. The technical term is “scaffolding”.

Bilingualism and Learning other Languages

Q. When learning more than one language,  how do children prioritise what they learn? I have been talking with a couple of mums with trilingual households and it seems that the child’s interest in all 3 languages waxes and wanes.

Silke: I’m not an expert. But it probably depends on the context in which they use and learn which language. Also, I think you get more “balanced” multilingual if they use each language with both peers and family members.

Q. I’ve been giving my 9month old some access to Spanish cartoons:

… songs, books, toys – speaking what I know in Spanish to him. I’m only fluent in English. But I’m worried that I might confuse him. Could it effect him learning English or even Spanish properly?

Silke: Two language don’t hurt. It’s true: the most important thing is that they learn ONE language properly. But if that’s given, then they can also learn two or more.

Your son will definitely learn “proper” English and exposing him to Spanish as well is a great idea and won’t hurt him!

Children can even grow up being fluent in three languages. My colleague’s boy has amazing reading and maths skills and speaks Chinese, English and German. He’s not even 6.

Q Schools and nurseries in my neighbourhood tend to have French or Spanish lessons from age 3.

Will this benefit the child even if parents don’t practice with them?

Yes, if the lessons are interactive, they should pick up quite a lot. I think talking to French peers, for example, would be even more beneficial than practising at home.

Q: I’m interested in whether TV, etc in other languages helps too.

Sadly, I didn’t have the foresight to fall in love with a speaker of another language, and I live in a monoglot part of Scotland, what can I do to help my son learn other languages?

Silke:  They might learn a bit from TV, but it would be more important to expose them to face-to-face conversations in another language – even Skyping with a speaker of another language would work. They key is to have an interaction in the language you’re learning.

Q. Are there sensitive periods for language learning?

Yes, but it’s more of a continuum. It seems to be easier before puberty – people used to say. But it also depends on what you’re talking about. accents are quite hard to learn when you get older. But you can still be good at learning Chinese grammar when you’re 20.

Does the UK Support Breastfeeding? Q&A with Dr Ruth Stirton

Does the UK support breastfeeding? The World Breastfeeding Trends Initiative (WBTi) is assessing and monitoring…

What does good early years education look like? A Q&A with Sandra Mathers