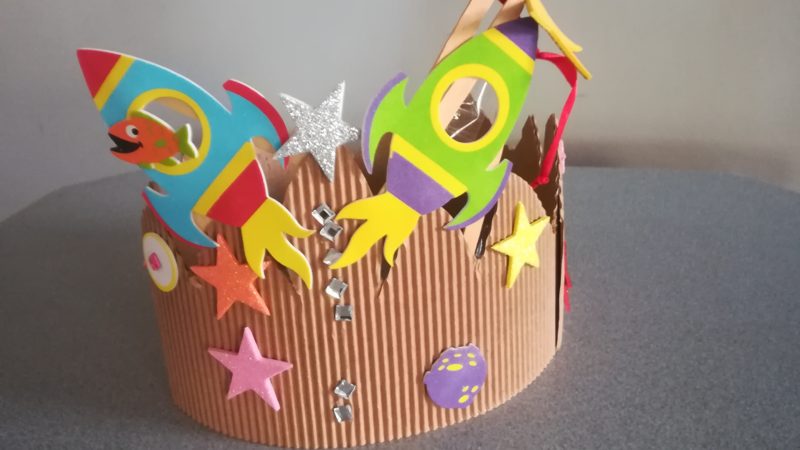 As a mum of two little children, I have to grab my ‘me time’ wherever I can get it. A post-bedtime visit to the deserted supermarket, a chocolate bar snarfed alone in the swimming pool car park, ten minutes locked in the loo in your own home: we all know these moments to be a sort of affordable mini-spa where you don’t even have to shave your legs.

So imagine my excitement when I was invited to attend the Parenting Science Gang final event for a weekend of grown-up chat and thinking time, sans bébés. 30 parent citizen scientists (plus many of their families) and 12 professional collaborators and facilitators were to come together in York for a science fair to share the results of the various projects, hear from guest speakers, and celebrate our achievements.

I made the journey from Edinburgh to York by train (that’s several hours of mini-spa right there) on the Saturday morning and, making the final approach by bus, began to easily spot fellow pilgrims, conspicuous by their babies snuggled in colourful woven wraps and toddlers demanding “Boob!”. Oh, did I mention this was a family-inclusive event? More on that to follow. 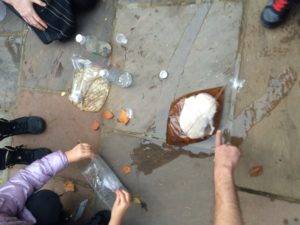 An observer following me into the conference venue at this point would no doubt have been taken aback to find themselves squeezing through a lobby whose floor seethed with wriggling children, while staff reached over their heads to hand out badges and folders to delegates. Perhaps they’d have been surprised again to see most of the men present depart out of the door with the little people, off to explore York or take part in their own science activities, while mostly mums headed upstairs to get on with the big science. (A keen eye would have spotted a few little bodies sneak upstairs too: the ones who couldn’t be without mum so snuggled by her knee, or on the boob, or wriggled on a mat on the floor as we got on with business.)

In the conference room, having offloaded or brought along our children as we wished, we heard talks from professional researchers who had collaborated on the project, and had the chance to ask questions and discuss. In here, no observer could fail to sit up and take note of the sincere and mutually enriching interactions between professional and citizen scientists. “I value the chance to talk to professional scientists,” and “I am surprised and inspired by questions the citizen scientists come up with,” have been recurring sentiments among the lay and professional participants in Science Gang activities. They are sentiments which embodied the weekend. 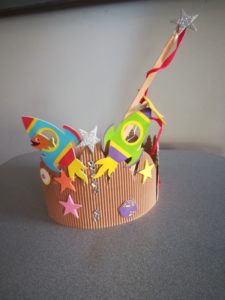 A handmade crown, by the children, for Katherine Mathieson, ‘queen’ of the BSA.

That afternoon saw the results fair, open by Katherine Mathieson, head of of the British Science Association, who performed her ceremonial duty wearing a fabulous crown made for her by the PSG kids. Each group displayed a poster (posters are A Thing in science, you know). We talked and talked and talked. PSG discussion usually takes place in Facebook groups, but what a treat to have the time to quiz each other face to face and in depth. So it was that, suffering from universal cases of face-ache, we were more than ready for dinner, a feat of organisation I still consider one of the greatest achievements of the PSG organisers. Would you baulk at the idea of surveying 20 fussy families and designing a menu to keep them all happy? The PSG team didn’t – just one of the things that made coming to the event a feasible option for so many of us.

But then, PSG has always been family-friendly, and I mean really family friendly. Every event, online or otherwise, carefully consulted upon to make taking part around family life actually viable. Let’s be clear about this: we were invited to a fully catered, overnight event, and told we could bring whoever we needed to bring. What ages of children do you want to bring? Can we provide a nanny, or would you like to bring a supporting adult, or will you just bring baby and your boobs along 24/7? Do you want a cot, a single bed, a big bed to co-sleep in? These are just some of the many questions we were asked to help offset the eleventy-billion reasons it’s difficult to get to an event like this when you have a young family. 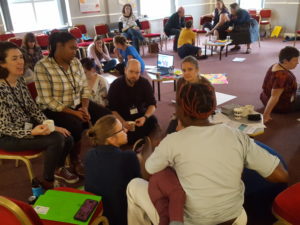 Scientists, citizen and professional, working together

And the organisers somehow made this all work, which is how we came to sit down together to a dinner which suited everyone, at a time which suited everyone, taking shifts with highchairs and passing babies to willing volunteers so mum could eat with both hands. If I still needed reassuring that science is for the likes of me, then sitting at table with the family of the child development expert I’d been fan-girling hours before and seeing that her toddler also escapes the highchair and rubs baked beans in his hair would have done it.

In the evening there was a prize-giving with special mentions for achievements such as “Most Heroically Pregnant Member Of The Gang”. We had all forgotten how nice it was to get a certificate. We were happier than 3-year-olds with a sticker from the dentist. And later, after allowing a realistic 3.5 hours or so to get children to bed, we had a pub quiz. 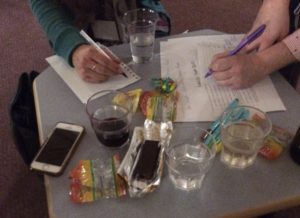 Jelly sweet-fuelled concentration during the quiz

It was nothing special, you know, just your standard progression from oh-I’m-not-really-into-quizzes to extreme competitiveness in 20 minutes, progressing to tactical plays such as shamelessly flattering the quizmaster, and actually trying. Some of the organisers and professional scientists had formed a blatant teacher’s team and for a time threatened to win (#awkward) but justice was restored when their rivals pulled a blazing final music round result out of the bag. That one of their number later revealed themselves to be a TV quiz celebrity is something we’re all not really talking about.

Buoyed by the knowledge of nannies and partners on duty in the morning, some of us stayed up until pre-parenthood o’clock. Thank the gods of citizen science for fried breakfasts. Next day we had time to talk about the future: what could we do next, and how could we disseminate our findings. Our group fleshed out an idea for a follow-up study to measure children’s gender-stereotyped attitudes before and after exposure to school. How exciting it was to be interrupted by an academic who wanted to say, this is a good and feasible proposal and I think we could find the resources to do it. Thrilling, but not quite as thrilling as the breastfeeding group’s dissemination plan of a giant, milk-squirting boob fountain in Trafalgar Square.

Eventually, it was time to go home and back to reality. With packed lunches and mild hangovers we went our separate ways, glowing with inspiration and affirmation and the warmth of new-made friendships. That afternoon I had a head full of citizen science and no shortage of things to think about while sitting in a cosy York pub for a few hours until my next available train*.

*Honest, it was the only train I could get. Honest. Well, OK, but you remember what I said about me-time…

You can read more on our blog about the various projects here, or listen to podcasts recorded at the final event here.

And we're off... Our first newsletter celebrated the launch of Parenting Science Gang (PSG). Three weeks…